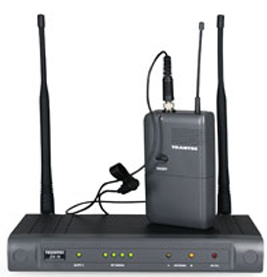 In addition to the ongoing (and ever evolving) 5000 Series UHF Wireless Systems, TOA will be expanding its wireless lineup with the introduction of three new wireless systems under the Trantec banner. These include two low-cost models, the S4.4 (available as a dynamic hand-held & body-pack/lav) with 4 frequencies that may be used simultaneously and the S4.16, with 16 tunable frequencies (8 simultaneous). Both are diversity and feature balanced audio out and over 10hrs of continuous operation with a single 9V battery. These are aimed at budget-conscious schools and churches, who seek performance and reliability at an affordable price. On the higher-end is the Trantec S5.3, which features over 640 channels (12 simultaneous) across a 30mHz range, all metal construction (tuner and transmitter) and provides over 10 hrs from a single AA battery. The S5.3 is also equipped with PC control software as a standard feature, able to control & monitor up to 12 systems form a single PC GUI using a standard USB interface. The S5.3 is design for optimum performance and made to withstand the most rigorous production use. Ideal for school & higher ed, as well as HOW, corporate events, musical performance & rental. TOA with be offering the S5.3 as "racked & Ready" systems, complete with antenna systems and road case. A range of optional lavalier and headset mics will also be available for all three systems. The new models will ship in March 2014.*Trantec is a UK-based wireless brand which manufactures high-end wireless systems used throughout Europe and the UK. Trantec systems are used exclusively by BBC television, West-end London theaters and are on tour with major acts. Trantec is a wholly-owned subsidiary of TOA Corporation.

We use cookies and Google Analytics to ensure that we give you the best experience on our website. If you continue to browse our website, we shall assume that you accept them. To learn more, please see our Data Protection Policy